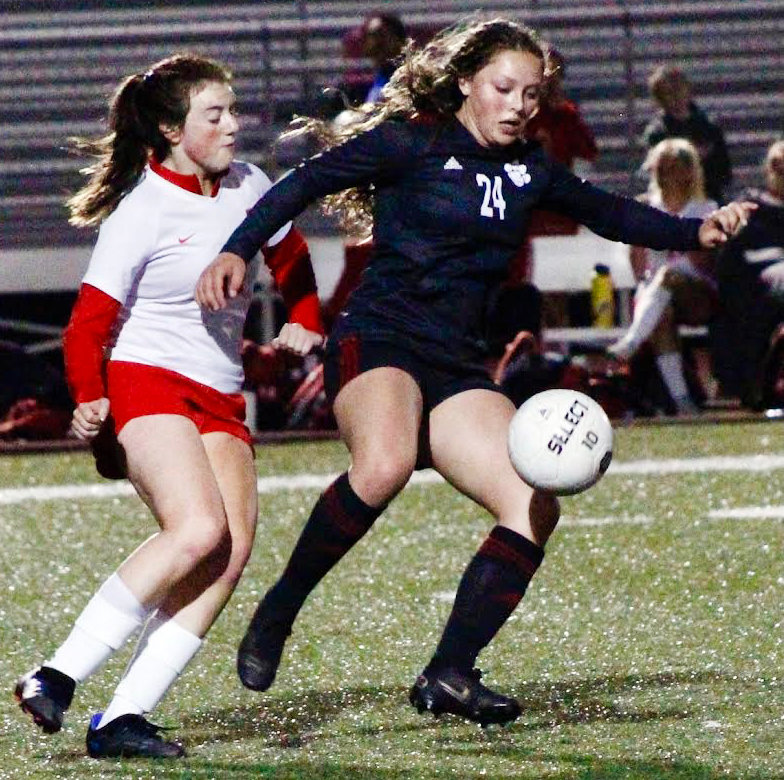 Audrey Carlton and Natalie Morgan were part of a freshman class that made an immediate impact for Ozark in softball last fall. They’re doing the same in soccer this spring.

The Lady Tigers are shaping up to be one of the biggest turnaround stories of this school year. They enter this week with a 14-3-2 overall record and arealone in first place atop the COC with a 6-0 conference mark.

“With softball, our chemistry was really good,” Carlson said. “So, I had hopes for soccer to have the same chemistry and we do.”

Carlton, Morgan and Addie Shuler are all starting as freshmen and thriving. The trio has combined for more than 20 goals.

The three freshmen each netted a goal in a game for the first time this season in the Lady Tigers’ 4-1 victory versus Carl Junction last Thursday.

Like Carlton, Shuler has been pleased how the freshmen and veterans have interacted.

“We enjoy all the girls and are having a great time with them,” Shuler said.

Prior to this year, the link between Ozark’s softball and soccer programs had been Abby Ford. The all-state center fielder started in both sports as a freshman, but suffered a torn ACL during a soccer practice her sophomore year.

Ford’s injury forced her to miss her junior softball season, before she made a triumphant return as a senior. The Missouri State softball signee never returned to soccer.

“It really hurt the softball girls,” Morgan said of Ford’s absence in 2020.

As impactful as Ford was for Ozark in softball, her injury didn’t cause Carlton and Morgan to have second thoughts about continuing to play soccer.

“I’ve never really been scared of an injury because I have played soccer my whole life,” Carlton said. “I know my limits. I know how to not get hurt for the most part. Of course, you can’t always avoid (injuries). But I wasn’t scared.”

Carlton actually grew up with soccer as her first priority. She enjoyed success in soccer much earlier than softball. But she was a breakout star as a slugging outfielder last fall.

“I think I’m pretty equal in both sports,” Carlton said. “In previous years, I would have said soccer. But now I really don’t know.”

Ozark can wrap up the COC championship with wins against Willard and Carthage this week and Republic next week.

“I want to win it for the seniors,” Morgan said. “You can tell they want it so bad.”