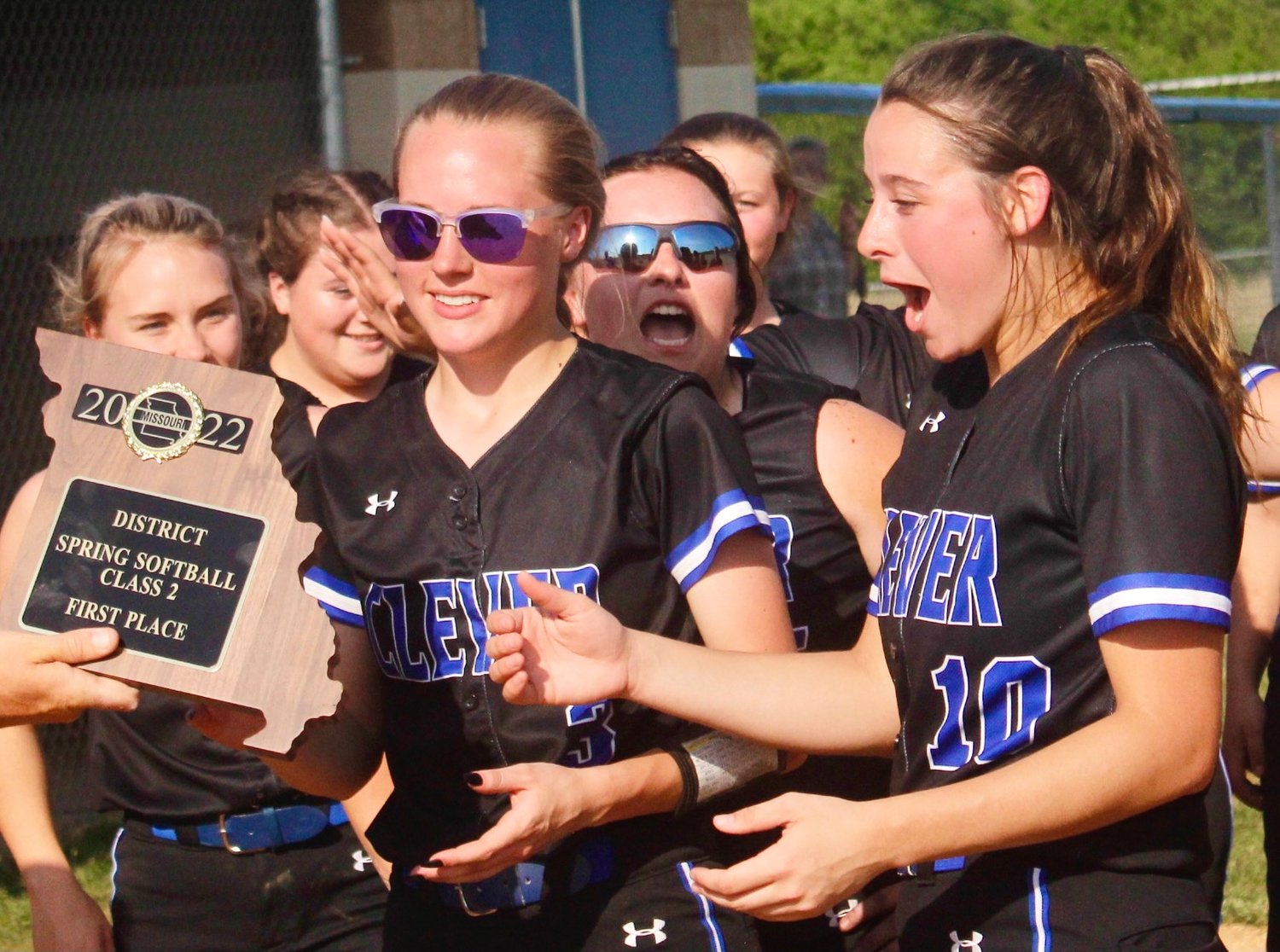 Kenna Wise doesn’t golf or play pool, but appears to have the kind of exceptional hand-eye coordination to excel in both.

“We have a pool table in our house, but I don’t really use it,” she said.

Wise couldn’t have placed the ball off her bat any better on her two hits that led to the only runs in Clever’s 2-0 triumph versus Sparta in the Class 2 District 5 championship game Wednesday.

Wise bunted for a lead-off single in between pitcher Natalie Wilks and third baseman Aysha Fulton and came around to score for a 1-0 Lady Jays first-inning lead.

“When they are crashing in, I just try to put it through them,” Wise said of Sparta’s defense against the bunt. "If they start charging early and I can see them coming at me hard, I know I’ve got to get it past them or they’re going to get me out.”

Wise went on to steal second base, steal third base and scored on a safety-squeeze bunt by Savannah Ketcherside.

Clever couldn’t have asked for a better start.

“It helps with our team and our attitude when we show that one person can do it,” Wise said. “That means everyone can do it. If I can go out there and set a tone in the very first inning, I’m going to do it.”

In the sixth, Wise ripped a line-drive double over the head of left-fielder Abbi Crocker, who was playing shallow in anticipation of a blooper over the infield.

“It was a best-case scenario,” said Wise, who had taken note how shallow Crocker was playing. “(Wilks) gave me a pitch I could handle. I knew getting another run would boost the morale of our team and give us a little cushion.”

One run was all winning pitcher Kylie Wenger needed. She shut out top-seeded Sparta (22-3) on three hits.

“What worked for me was moving inside and out,” Wenger said. “My Dad has been telling me that since my freshman year. But I really focused on that tonight. Staying calm and moving the ball around — up and down, in and out — I hit pretty much everywhere I wanted to. I wasn’t missing.

“The umpires weren’t doing us any favors. It was a tight strike zone,” she added. “But I knew that coming into this game because of the previous games we’ve had this week.”

Wenger surrendered 10 hits, including four doubles, in a 7-5 regular-season loss to Sparta. But she valued the experience she gained leading to the teams’ rematch.

“You’ve got to remember what batters do and learn from that,” she said.

Wenger received help from Ketcherside in left field, who tracked double a couple fly balls that were could-be hits.

“Savannah did a great job out there,” coach Cheryl Grant said. “She gets a good jump on the ball.”

Second baseman Ryley King chipped in by turning a double play in the fifth. With one out and a Sparta runner on first, King fielded a grounder, tagged out the baserunner and fired to first.

“I saw the runner coming at me, so I was thinking, ‘This is the time, this is it,’” King said. “It worked out well. “I was so happy I couldn’t stop smiling. It felt so good. Everyone was going crazy and giving me high-fives."

King made sure as she tagged the runner to keep her bare hand on the ball as she placed the ball in her glove.

“I had both hands on the ball,” King said. “From the time I was little, my Dad was telling me, ‘Two hands, two hands.’ That was going through my mind while I was tagging her.”

Wenger went on to face only three batters over the minimum. She threw a first-pitch strike to 18 of 24 batters. When she fell behind in the count 2-1 or even 3-1 late in the game, she battled back.

Wenger retired Sparta 1-2-3 in both the sixth and seventh.

All this while toiling in 90-degree heat and pitching a complete game for the third time in as many days.

“The weather didn’t help and my arm was sore,” Wenger said. “You just had to work through it. The girls hyped me up. I knew my whole team was behind me, so I was good.

“We hadn’t had a hot day (this spring), much less three of them like we’ve had this week,” she added. “It was ridiculous. When I came in the dugout (for Clever at-bats), the girls had cold towels for me to put over my face and they were pouring water on me.”

Sparta (22-3) led in just one inning over its semifinal win and final defeat.

Clever (16-10) is a District champ for the first time since 2016 and moves on to meet Diamond (26-) in a Quarterfinal at Diamond on Tuesday.

Diabetes doesn't slow her down: Morgan plays with passion atop Ozark lineup